Broadway is a small Cotswold village in Worcestershire, England. Often referred to as the ‘Jewel of the Cotswolds’, Broadway village lies beneath Fish Hill on the western Cotswold escarpment. The ‘broad way’ is the wide grass-fringed main street, centred around The Green, which is lined with red chestnut trees and honey-coloured Cotswold limestone buildings, many dating from the 16th century.

Originally a busy stagecoach stop on the route from Worcester to London, Broadway became home to artists and writers including Elgar, John Singer Sargent, J.M. Barrie, Vaughan Williams, William Morris and Mary Anderson. Broadway is thought to have been the model for Riseholme, the home of Lucia in the novels of E F Benson, before she moved to Tilling (Rye) in Sussex.

However, in 2004, Worcestershire Young Archaeologist’s Club, a regional branch of the Council for British Archaeology’s Young Archaeologist’s Club, found evidence of earlier occupation. Their fieldwalk uncovered a large amount of Roman and Medieval domestic waste and, most importantly, a large amount of worked Mesolithic flints. This work puts the history of the village back 5,000 years and may be evidence of one of the first partially settled sites in the United Kingdom. It is believed that this would have been a stopping point for hunter-gatherers. 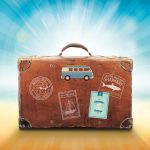