Chipping Campden is a small market town within the Cotswold district of Gloucestershire, England. A record in the ‘The Domesday Book’ recorded a population for the town of about 300. There was a settlement in Chipping Campden by the 7th century and, almost certainly, long before that.

Chipping Campden is most noted for its long and wide High Street, dating from the 14th century to the 17th century. “Chipping” is from Old English ‘cēping’, “a market place”.  Once a rich wool trading centre in the Middle Ages, Chipping Campden enjoyed the patronage of wealthy wool merchants at the time.

Here are a couple of links to places The Cotswold Walking co recommend for food and drink:

Broadway is a small Cotswold village in the county of Worcestershire, located close to the border of Gloucestershire.

The name Broadway (‘broad way’) actually derives from the description of its wide main road, which is known today as the High Street. It is the High Street (one of the longest in England) which runs through the village that was important for early settlements in the area.

Broadway is an ancient settlement whose origins are uncertain. There is documentary evidence of activity in the area as far back as Mesolithic times. This means the known history of the village is over 5,000 years.

It gained the name ‘Bradsetena Gamere’ (Broad Village) around the 9th century and underwent a number of changes until the modern spelling ‘Broadway’ became common usage in the 16th century.

Broadway was a domain of the Mercian kings and was vested in the Crown in the person of King Edgar in 967. By the 11th century the village was already well-established and apparently thriving. It is listed in the Domesday Book in Great Domesday folio 175 for Worcestershire as part of the land holdings of the Church of St Mary of Pershore.

It continued to prosper, becoming a borough by the 13th century. Broadway’s wealth, as with many other Cotswold Towns and Villages, was based on the wool and cloth trade. By around 1600 the village had become a busy stagecoach stop on the route from Worcester to London.

Here are a couple of links to places
The Cotswold Walking co recommend for food and drink:

Would you like more information about The Cotswold Walking Co guide to Cotswold Towns and Villages? Or our Cotswold walking holidays? Here is a link to our contact page 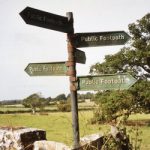